This Saturday saw a return match for Romsey Hockey Club Ladies “Fabulous Fours” vs. Hamble. The Fab Fours were led by Warrior Captain Widdowson. There was a trio of mothers/ daughters, Berendsen’s, Marino’s and French’s – #I-am-acting-my-age!

The Fab Fours have been down on their luck in recent weeks with winning being as elusive as a unicorn. Warrior Widdowson took control of the pre-match talk. Team positions were an unusual mash up; in defence were the Fantastic French’s, Marino (J), O’Hara and Jones. The Berendsen’s owned the mid-field, with Warrior Widdowson, Feisty Field and Marino (S) (#my game face has lipstick on).

Hamble and Romsey were evenly matched. There was some excellent shadowing from Marino (J), Berendsen (J) and French (J) who put the Hamble attack under pressure. Jones and O’Hara were outstanding in the D clearing the ball with confidence. Romsey defended a trillion short corners only conceding one goal as a result. The goalie was feisty and fearless, trapping the ball in epic style – with some acrobat diving to prevent Hamble from scoring.

Romsey demonstrated newly acquired skill, using the width of the pitch to take the ball into Hamble’s half, playing with strength and determination. The first Romsey goal came from a short corner, with Feisty Field injecting to the top of the D and received by Brilliant Berendsen (J) who did a clever slip shot to Lippy Lu (S) who miraculously managed to sweep the ball into the goal. The 2nd goal came from beautiful play by French (J) to Marino (J) who skilfully tapped it to Feisty Field. Field was able to smash it across the goal mouth to resoundingly hit the back of the goal. Jubilant celebrations all round much to the amusement of Hamble.

Hamble’s 2nd goal was conceded following a short corner with a lucky shot on post. Romsey were undeterred with some outstanding play from Jones, O’Hara and the French duo. Berendsen (S) was always on hand to help clear the ball from the D, as was Maverick Marino (J).

In the words of Pharell – the Fab Fours didn’t wait for the stars to align…..they reached up and rearranged them the way they wanted to creating their own constellation – with stars shining brightly throughout the whole team. Well done team – great game – on from a draw is a win!! 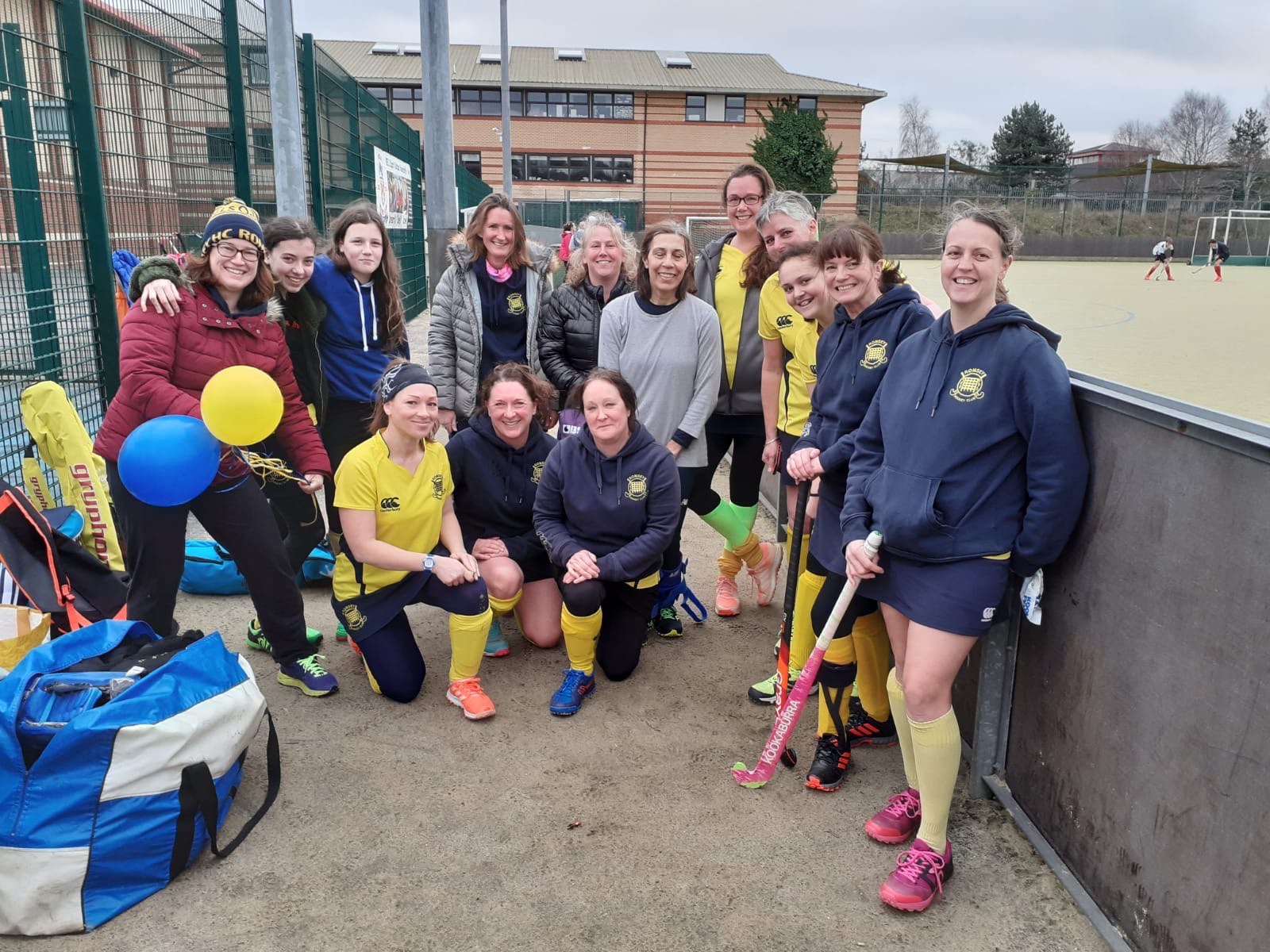 The Fabulous Fours friendly spirit was on full display for Saturday’s match again newcomers Poole 2, who tipped the scales as Romsey’s new favourite opposition. Although the Fab Fours lost 4-0, importantly i) it was less than they anticipated losing by, ii) it was a fantastic fun game and iii) in their hearts (if not on the score sheet) they were winners!

The Fab Fours were supported by their diehard fans – the Fourquettes, sporting yellow and blue balloons. Captain Coops made a tactical decision to play a 5:5 formation with feisty Field, outstanding O’Hara, fleet footed French, capable Coops and maverick Marino’s (senior & junior) as the defensive line, supported by the mighty Manners in goal.  The brilliant Berendsen (duo), wiley Wisey, pivotal Procter, warrior Widdowson and fiendish Farquharson were the forward line, who demonstrated some blinding ball skillswhich saw Poole fighting to retain control of the ball.

Poole forced several short corners which were ably defended with no goals conceded. They had several lucky moments converting scrappy balls into goals. A tense moment saw mighty Manners defending a flick goal from the p spot; remarkably she held her ground and batted the ball with courage and confidence. It was like we had won a World Cup, with the team and the fourquettes going wild.

The Fab Fours put Poole under unexpected pressure breaking through their defensive line with some impressive running from pivotal Procter, warrior Widdowson, fiendish Farquharson and brilliant Berenedsen (junior). Farquharsonand warrior Wiidowson forced a couple of errors from the Poole side resulting in three short corners from which they were unlucky not to score goals. Poole in return managed to get the ball out of the D only to be held up by capable Coops and maverick Marino (junior). Feisty Field was on top form in her new domain as queen of defence owning clearance from the danger zone. They were some marvellous intercepts and frustrations for Poole by O’Hara, Wisey and Berendesen (senior). The 2nd half saw a number of injuries for the Fab Fours with a strange disposition taking over the team with O’Hara, Wisey, Berendesen (senior & junior) taking tumbles, resulting in the last 10 minutes of the game with the Fab Fours being reduced to 10 players on pitch.

Although the Fab Four’s ultimately lost this week’s game they were on a high. It was an enormously satisfying game, fairly played against a delightful opposition. And in the words of Yoda “Patience you must have, my young Fabulous Fours”our time for victory will come again. 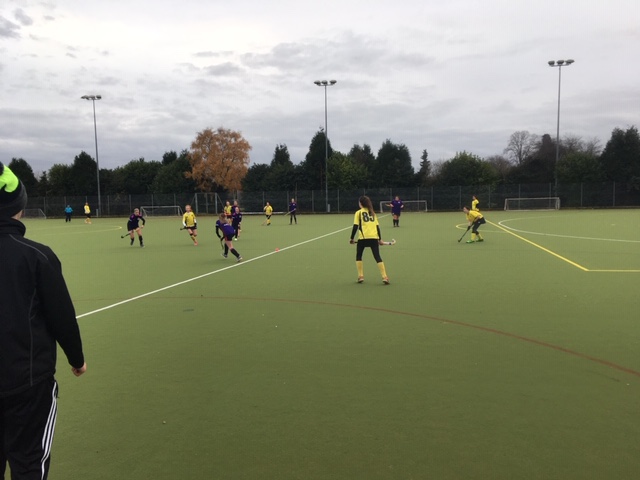 Saturday’s match against Romsey’s favourite opposition (Portsmouth) saw only “the best of times”, contrasting last weeks’ battle, with a well-deserved win of 4-0. 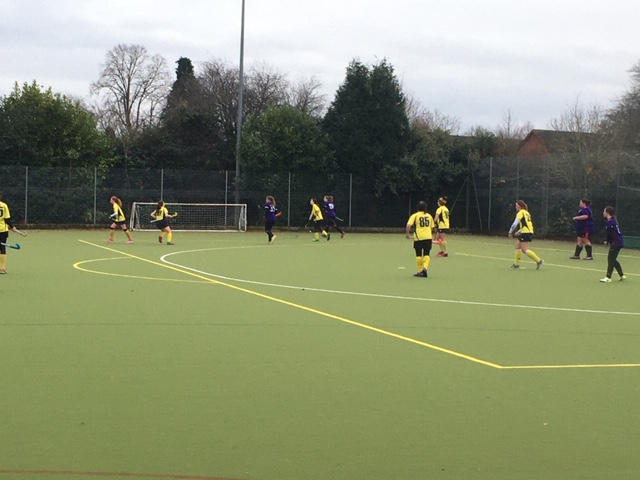 Romsey dominated the game throughout making easy pickings of Portsmouth defensive line with some wonderful play from Grout, Berendsen (Junior) and French (Junior), with some fabulous partnerships. Graceful Grout scored the first goal with an effortless sweep from the top of the D. The 2ndgoal followed shortly from warrior Widdowson, demonstrating some fancy reverse stick hits. Pivotal Procter helped set up goals 3 and 4 ably scored by Awesome Adams (one). Athletic Adams (two) had several serendipitous shots at goal, missing by a whisper.

When Portsmouth were able to break through the Romsey attacking line, they made fast work towards Romsey’s defence – but found the wall of yellow difficult to counter. Tenacious defensive play came from capable Coops, wily Wisey and outstanding O’Hara. Brilliant Berendsen (Senior) had some epic moments, put Portsmouth players under pressing channelling them down the wing. Forward Field took a turn at a new defensive position and found her calling with some outstanding shadowing and hefty hits from the 16.

As always, the goal was covered by the very adept Andrews – who defended with her usual grit and gumption. Player of the match was warrior Widdowson for her fabulous first league match goal.

The Fab Four’s ended this week’s game on a high and in the words of Babe Ruth “Remember ladies, there’s heroes and there’s legends. Heroes get remembered but legends (Fab Fours) never die, follow your heart ladies, and you’ll never go wrong.” 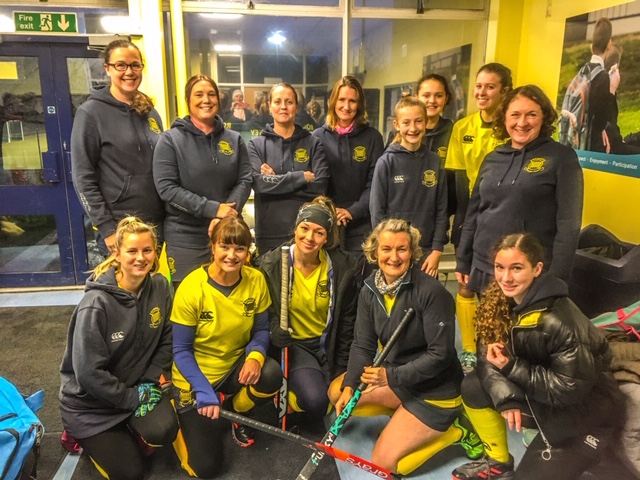 The first half was defined by a frustrated Trojans, who although on the attack were unable to break through the determined defensive line of Marino (Junior), clever Cox, Jones, Wise(y) and O’Hara. Trojans had the benefit of a number of short corners, but Goalie Procter demonstrated her usual tenacious spirit and courageous goal coverage kicking and batting several fast balls out of the D, with clever Cox and Marino (Junior) on hand to belt the ball out of danger.  Wonderful Wisey, joyful Jones and outstanding O’Hara had some marvellous intercepts, vexing the attacking side.

Captain Cooper (Coops) supported the midfield exasperating Trojans’ attack with some nifty turns and drag Vs, winning the ball on more than one occasion. Whiplike Widdowson showed her usual gumption with some swift midfield runs, putting Trojans under pressure. Fantastic Field and amazing Adams had a perfect partnership with flying attacking runs, supported by brilliant Budge and magic Mason. Patient Procter (senior) had the opportunity to goal hang and nearly swiped the ball into the Trojans goal on a couple of occasions.

At half time, neither side had conceded a goal. And then Winter came…. Trojans dominated the 2nd half with 4 goals in quick succession. Romsey valiantly battled on – but another win evaded them. Marino (Junior) was player of the match for her determination to keep the Trojans “White Walkers” at bay!

The ladies’ fourth team were on sparkling form again this week against Fleet & Ewshot, and are celebrating an unprecedented (for them!) unbeaten streak. The team manager Hilary Andrews was delighted with the away match outcome of 2 – 2.

The hosts started off strong with a fast and furiousattack, conceding an early corner heroically saved by the artful goalie Derien Pugh. The hosts quickly followed through with a 2nd strong counter attack off a long corner scoring the first goal. The fours undeterred fought back with sweeping attack up the wing by Parminder Mew and Angela Procter. Jo Field passed a beautiful ball to Tracey Mason who was in position to tap the ball into the goal.

Fleet & Ewshot took advantage of spritely forwards to quickly follow up with a 2nd goal. Romsey’s fighting spirit quickly drew the teams even with Cara Cox driving the ball up the pitch to the Clare’s – Cooper & Herbert, with Claudia French, Mandy Berendsen and Tracey Mason making use of the central channel to set Hilary Andrews up to smash the ball into the back of the net for the 2nd goal.

The 2nd half of the game mirrored the first half with the Marino’s and Claire Wise chasing down the attacking side providing a strong defence. The well match teams spent equal amounts of times in each others D’s, which finished at full time on 2:2 draw. Both teams thoroughly enjoyed the game, posing for a combined match photo at the end. Star player was Claire Wise, for achieving so many clearances from the D without giving away short corners. As always the Fabulous Fours are grateful to their Fabulous Manager and Coaching Staff for their continued support and direction, allowing this fabulously determined team to continue to improve week on week.