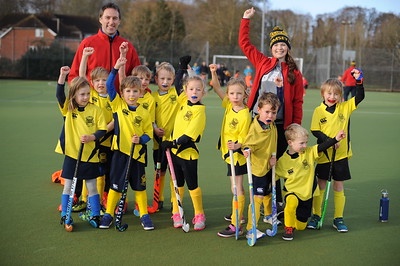 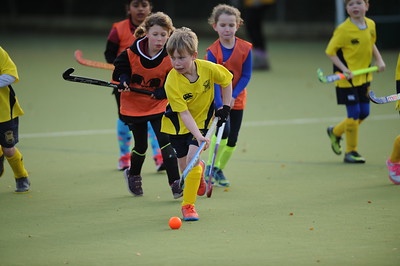 The 4th tournament of the season gave us an opportunity to play at home and host the tournament.  The format was changed so that all matches would complete in 90 minutes to allow the Under 10s tournament to follow.  This produced a very intense schedule for this young group with 3 consecutive matches, then a 20 minute break, followed by a further 3 matches.  We felt in a strong position to benefit from this with a strong squad of 10 players, but due to injury and illness unfortunately Laurence and Emma had to withdraw.  As both of them are key defensive lynch-pins, it presented a tough challenge to the squad and also the coach’s rotation plans to keep the players fresh.  Such is the enthusiasm of the youngsters to gain tournament exposure that Rory and Hunter were keen to make the most of the others misfortune.

We started strongly against New Forest which meant that Cherry had an easy time sharing defensive duties with William.  Hamish and Noah controlled the game well and both scored early on to calm nerves and enable early squad rotation.  Final score 2-0.

Hamish swapped into defence for the next game against Andover A enabling Cherry to move back into midfield.  We dominated the game and Noah picked up his second goal in 2 games to give Romsey a 1-0 win at the final whistle.  The squad’s performance in these games were absolutely top class.  The passing and movement was fantastic and a real pleasure to see after their hard work in training.  In particular, Gracemade a great run from one side of the goal to the other at a free-hit which Cherry spotted and provided an excellent pass.  We were playing well and were ready for the next match. 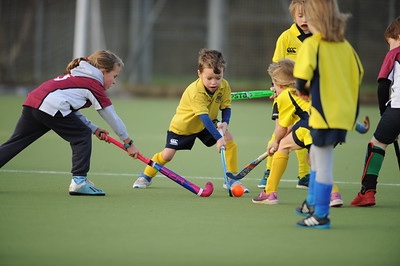 We hadn’t played Trojans since the 1st tournament in early October when they comfortably beat us in our only defeat of the season so far.  So we were keen to show how much we had improved.  It was a tense game with the team giving maximum commitment.  The first 5 minutes action took place close to the Romsey goal, with the whole team tackling hard and trying to clear their lines.  Hamish made some brilliant tackles and clearances in front of the goal which was reminiscent of the backs to the wall performance just over 12 months ago at the Southampton tournament. Unfortunatelyhistory repeated itself and we conceded a well-worked goal.  Strangely, the rest of the game was much more even as the team managed to pass the ball out of defence with Hamish and Noah making strong runs towards the Trojans goal.  We almost conceded a second goal after a very fast break, but William stepped out of defence to put off the attacker so he hit the post.  In spite of more good tackling from Olivia, Grace, Jake and Cherry, we conceded a disappointing own goal just before the final whistle resulting in a final score of 0-2.  Nevertheless it was a major improvement and we can look forward to playing them again in the New Year. 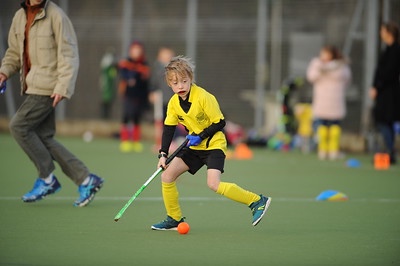 After a break to refuel with cake and sweets, the team took on Winchester.  They shrugged of any disappointment from the Trojans loss and quickly got a 3-0 lead, all scored by Hamish.  He was immediately substituted which allowed Gulliver and Hunter to come on and join the fun.  With a less experienced midfield, the defence was quite busy breaking up attacks.  Grace demonstrated that she can play anywhere as after scoring lots of goals in recent tournaments, she showed great timing in breaking up attack after attack then passing the ball out to midfield.  Winchester scored a consolation goal so the end result was 3-1, another good win for Romsey. 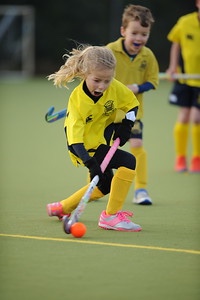 The next match was against Andover B, but this was a stronger side than the ‘A’ side we played earlier.  After we’d just missed the goal from an excellent cross, Andover broke up the pitch to open the scoring.  They then repeated the trick a few minutes later, resulting in a 0-2 loss.  Perhaps tiredness and missing 2 of our usual defenders contributed to this frustrating defeat.

However the team re-grouped again for the final match.  Noah wasn’t showing signs of tiredness, running onto lots of passes from Hamish and the rest of the midfield.  He scored a quick-fire hat-trick to take his total for the tournament to 5.  Every tournament he comes alive in one of the games and is virtually unstoppable!

So after an hour’s worth of playing, we’d won 4 matches and lost 2.  In some ways this could seem disappointing compared with previous tournaments, but the team’s attitude, commitment and resolve to adapt to the loss of 2 teammates was amazing and was reflected in the standard of hockey they played which was their best yet.  We’ll certainly look forward to the remaining tournaments in the New Year and hope to continue the progress made in 2019.