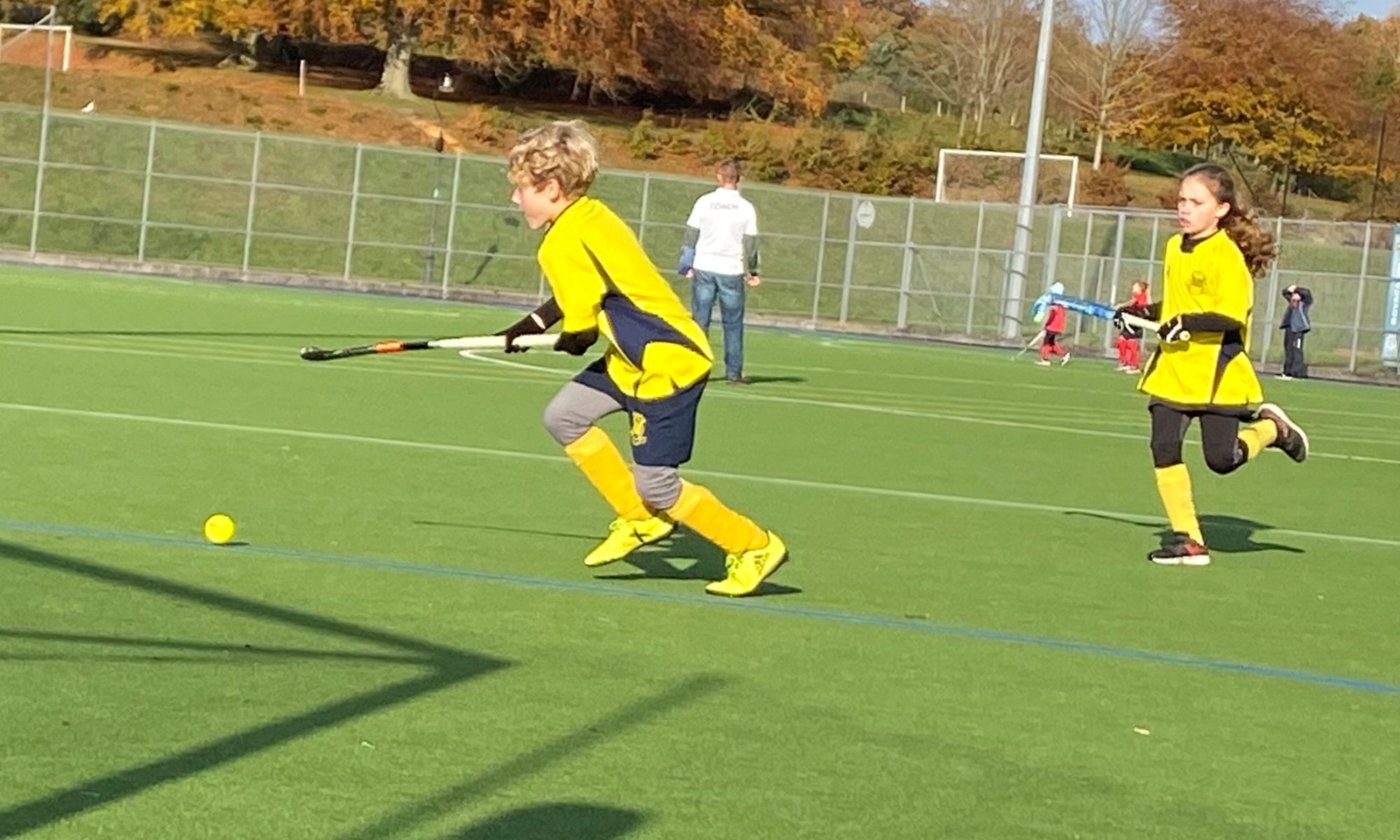 There was a chill in the air as Romsey A Under 10s arrived for their third tournament of the season and they were dominant in possession from the first push back! Making full use of the half-sized pitch they played fantastic passing hockey which resulted in an abundance of shooting opportunities. Romsey A played 5 matches and won them all only conceding one goal in the whole tournament with another dazzling display of hockey.

The first match was against Trojans B which saw them go behind in the first minute. Their heads did not drop and straight away Romsey were on the attack with Oscar and Caitlin linking up well in midfield with Grace who was up front. Daisy played particularly well as the sweeper keeper and together with Evie in defence, were strong in the tackle. The game ended with a 3-1 win to Romsey.

The second match was against New Forest C and their confident play from their first win continued. Sabine and Rosie were excellent at sticking to their positions on the wing which helped Romsey use the full width of the pitch resulting in fantastic crosses which after a lot of pressure, resulted in a goal. The match ended with a 1-0 win to Romsey.

The next match was another strong match for Romsey against Andover B. Sabine crossed the ball for Oscar to dribble past two players and score with his reverse stick. Henry worked tirelessly up-front chasing down the ball and providing Caitlin with a great pass to score the second goal. Evie and Rosie were exceptional in defence always clearing the ball confidently out to the wing. Romsey’s dominance continued with Caitlin scoring another 3 goals to end the match with a 5-0 win to Romsey.

They played Winchester C in their penultimate match finishing with a 2-0 win to Romsey. Sabine stuck to her position on the wing and was confident at taking on players to drive towards the goal. Daisy worked hard to keep possession and provide the forwards with shooting opportunities. The first goal saw Oscar dribbling from the left wing to score. Grace followed this up with a great strike for the second goal.

The final match was against Winchester A. Henry played a key role in driving Romsey forward throughout this match and combined well with Evie and Rosie who were both tournament debutants. The match ended with a 3-0 win to Romsey.

Yet again the U10s didn’t disappoint and continued their excellent form resulting in another fantastic display of hockey in what can only be described as a series of sensational results.  Huge congratulations to Grace, Daisy, Sabine, Rosie, Evie, Caitlin, Henry and Oscar for excellent team work through-out the tournament.

It was Romsey B’s first outing of the season and some fine team work ensured they were undefeated in their 5 matches and didn’t concede a single goal.

The first game against New Forest B was a great start to the day with an amazing performance from Maya and Clara in defence and some excellent attacking play, but ended 0-0.

Winchester A fell behind when Zach got a superb goal minutes in to the match. The defence held together well and the final score was 1-0.

Romsey showed high spirits against Salisbury B with a great goal from Charlie assisted by Camilla, who then scored the 2nd goal after an amazing pass from Zach. Charlie scored again and with strong defending from Clara the game ended 3-0.

There were some lovely passes against Southampton A from Anna, Maya and Imogen but the game finished 0-0.

The final game against Andover A was tense. Romsey dominated play with plenty of goal opportunities, particularly from Joe, but were unlucky to finish with a 0-0 draw.