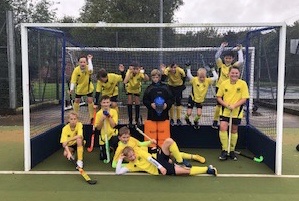 Romsey U12 Boys played Andover at home in the second match of the season. Despite the rain hanging in the air the boys played beautiful hockey from start to finish. Oscar scored the first goal, assisted by Tom, followed by Freddie and George finishing the first part 3-0 to Romsey. In the second part Jake was quick to score followed by a reverse stick from Josh, assisted by Milo. Milo came back to score the 6th goal with some help from Henry and in the last-minute George scored 7-0 off Theo’s a short corner. Due to Romsey advantage Tom decided to swap the boys normal playing positions in the third part of the match. Tom, Callum and Dylan, who beautifully managed our defence line, got to play up front together with Ben and Theo, Oscar and George were set to play in defence. Despite some difficulties to stick to the new positions the boys carried on great team play and before the end of game Freddie scored a final goal, finishing the match 8-0 to Romsey. Great to see that passing the ball payed off and that the goals scored and direct assists included all thirteen boys. Benji had a quiet day in the Romsey goal😊.

As Tom said last match, “Remember boys-we win as a team and we lose as a team” with the exception that today we certainly won as a TEAM. Well done all boys well done Tom for super coaching and Noah for umpiring.