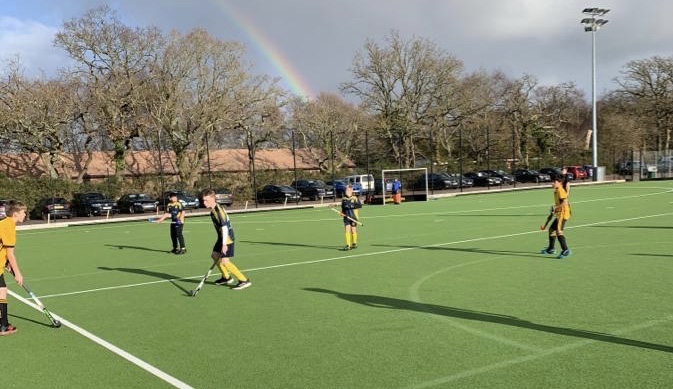 Bournemouth dominate the early exchanges but Romsey stood strong on the flanks.  Freddie and Daniel won a series of tackles, whilst down the middle Owen and Ellison defence seemed unbeatable.  Gradually Bournemouth found space in the D but Jo was in outstanding form saving three efforts in quick succession.

Slowly Romsey grew into the game breaking frequently through midfield.  The possession was soon rewarded.  A short corner was received by Will and he cleverly found Luke to the left of the goal who struck first time into the bottom corner.  The next corner was played accurately by Jack S to Luke who touched into the D and fired home.  Bournemouth were dangerous on the counter attack and scored from a clinical counter attack.  Jack S, Lorne and Jack M all went close before another rapid counter attack led to a Bournemouth fourth.

Romsey were still pressing with Ollie creating half chances for Jack M and Luke before Lorne dribbled through midfield and played in Ollie who raced into the D before shooting in the right corner.

The second half saw an even more determined Romsey camped in the Bournemouth half.  Romsey were unlucky in the D when shots from Luke, Ollie, Jack M and Will were blocked on the line.  Within a few minutes the attempts were repeated but Bournemouth managed to deflect for a corner.

The corner fell to Freddie who passed to Thomas who made no mistake and scored from 4 metres.  Unfortunately, two attacks and short corners from Bournemouth and it was 6-4. Romsey continued to press the defence and were able to push into midfield surrounding the D.  Shots continued to be fired in but were blocked.  Jack M received an excellent through ball from Owen, he rounded the keeper only to see his shot cleared off the line.  At last Lorne was rewarded dribbling into the D and firing an unstoppable shot left of the keeper.

Romsey were now scenting the equaliser.  Ollie, Luke, Will and Jack M saw shots blocked as pressure grew and with the last struck of the ball, Jack S final effort deflected wide.

An outstanding display against the top of the league team which Romsey deserved to win.