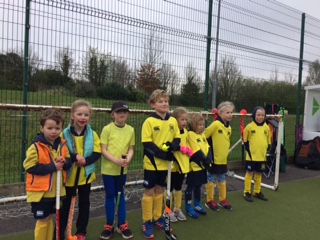 The last tournament of the season should have been a celebration of the season in the spring sunshine, but a combination of the clocks change and a cold wind made it tougher than expected for all.  A full squad of regulars for the season, plus William playing in his second tournament and Rory making his debut gave the stand-in coach for the day a selection challenge in all games.

The team started strongly against Andover B, dominating the game but not getting close to scoring.  The opposition were very strong in the tackle, sometimes putting anything in the way to stop the Romsey attacks.  Eventually the pressure told and Zac crossed for Henry for the first, and they then combined again for the 2nd just before the final whistle with a very sharp first time finish from Zac.  A 2-0 victory was a solid start.

The second game was against Trojans B who were a shadow of the A team that were held to 1-1 in the previous tournament.  Zac was properly warmed up with an appetite for more goals to add to his season’s tally with 2 more goals scored quickly after the start.  Hamish began to win tackles in midfield and showed real pace down the right escaping tackles before scoring at the near post.  Trojans struggled to keep the ball with Cherry particularly showing awareness to look up and pass after winning tackles.  The early goals enabled plenty of substitutions and Rory made his first appearance for the team.  After a rest on the sidelines, Zac came back on to score a 4th which was the final result.

Southampton B only turned up with 5 players causing too many selection headaches for the stand-in coach as I agreed to match their number.  Their 5 players were stronger than expected and matched the starting team, with Grace showing great determination to get strong and low in the tackle to win back possession.  For the final few minutes, Zac and Henry came on in their last game to try to win the game.  Unfortunately, their shots either narrowly missed, were stopped by feet and a ‘goal’ disallowed as Zac couldn’t score directly from a free hit.  A 0-0 finish was disappointing for the team, but it was the coach’s fault for not getting the goals first.

The team bounced back against Winchester B with a strong 4-0 victory with Zac getting another hat-trick and Henry also getting on the score-sheet.  The highlight of this game was Henry’s determination to sprint 40 yards down the pitch to stop Zac’s pass just before it went off the pitch.  Zac had followed up and managed to knock in Henry’s cross, but he definitely owed that goal to Henry’s efforts.

The penultimate game was against New Forest who beat our young side 4-0 earlier in the season.  This was a much more competitive game with Romsey just dominating possession and territory, but Emma and William made critical tackles when they were about to break up the pitch.  The team made it difficult for New Forest on sideline-hits, making a ring to make it easier to win back the ball.  But they also managed to pass their own side-line hits to team-mates showing improvement during the season.  Zac scored another goal to put Romsey 1-0 ahead, but unfortunately New Forest managed to escape once and score in the last couple of minutes to level the match at 1-1, which was a fair result after a close match.

The final game was against Andover C, although early on it was clear that this was not a weak team.  They tackled as strongly as the B team in the first game and we struggled to get around them either with lots of action on the right hand side.  Olivia was getting more involved having warmed up and managed to put in several good tackles to win back possession.  As legs and brains tired at the end of the tournament though, Andover escaped our high defensive line and ran through to open the scoring.  Zac managed to level with his final goal for the Under 8s after a very impressive, high scoring season.  But it didn’t take Andover long to retake the lead after another break and we were down 1-2.  Noah showed his skills developed over the season to beat a player and then ran on strongly towards goal.  However a great Andover tackle won them the ball with the final whistle coming shortly thereafter.

Although a disappointing finish to another good tournament, this young squad has improved so much during the year thanks to their own efforts and Super Coach Stuart.  Stuart – all us parents are very grateful to you for your time, commitment, knowledge and enthusiasm for teaching our children so well over the past season.   Thank you very much!