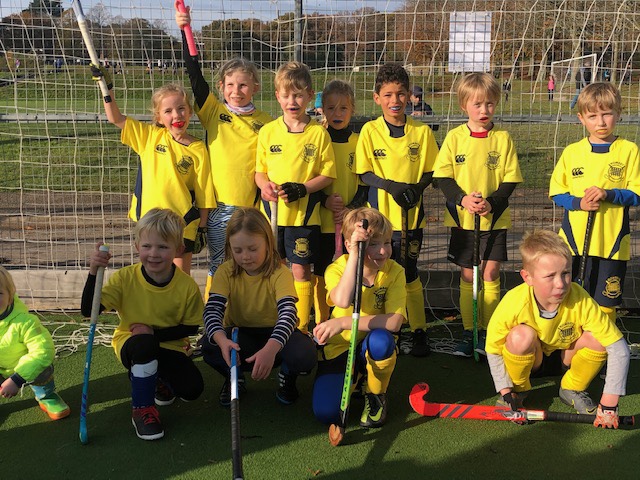 The last match report concluded with “If all players are available for the next tournament, it will be a strong squad to select from”. And a strong, large squad it certainly was – 11 strong giving the coaches a challenge to give all players a fair opportunity.

We opened against Andover in a game which we thoroughly dominated, but unfortunately failed to score.  Both teams had large squads so fielded 8 players instead of the usual 7 and we struggled to find space to go around their defence.  Our defence easily dealt with any clearances or opposition attacks so the ball never got into our half.  This continued throughout the morning with Emma, William and Lawrence generally playing that role.  0-0, a solid if frustrating start.

Next up were Salisbury A who succumbed to an improved performance from Romsey.  Cherry was tackling hard and controlling midfield, leading to Grace taking a pass near the goal, controlling it well before getting her feet around and slotting the ball into the goal. A 1-0 lead.  Then Olivia followed up with a ruthless finish to another cross.  An excellent 2-0 win.

After a long break, Grace was again on the scoresheet against New Forest A.  With Gulliver and Jake’s help in midfield, Hamish was beginning to show-off his skills.  Hunter, just days after his 5th birthday, was also getting involved tackling and carrying the ball forward.  In the end the dominance and pressure told and Hamish escaped to score a good goal which gave Romsey a 2-0 lead at the end of the match.

Bournemouth were the next opposition.  We had failed to score against them in the previous tournament as they were impressively strong in defence.  A quickly taken free-hit by Hamish took them by surprise and Noah reacted well to score.  Final score – 1-0, a good result against tough opposition.

The later games in the schedule are normally affected by tiredness, but the strength and fresh legs in this big squad meant Romsey were just getting started!  Southampton were the unfortunate opposition as easily won 4-0.  Grace picked off her third goal of the tournament whilst Noah really woke up with 2 more goals.  However Lawrence made the most impressive impact as a substitute and released from defence into midfield was able to show his ability.  Immediately after coming on he tackled, took the ball up to the edge of the D and finished strongly to score his first goal for the Club.

The final game started almost 3 hours after the first, but the players put in another completely dominant display.  Noah showed real improvement in movement and anticipation as he ran onto plenty of passes from Hamish to add two more goals to his impressive morning’s work (5 in total).  Not to be outdone, Hamish also finished his contribution with a lifted reverse stick shot to impress the crowd, although he was disappointed it didn’t quite make the top corner – keep on practising!

With the defence rarely involved and a large squad it was difficult to get all players involved resulting in two coaches being far more tired (mentally) than the players. Although the players dealt with the substitutions and lack of game time well – maybe we’ll select a smaller squad for the next one in Romsey on the 8th December!