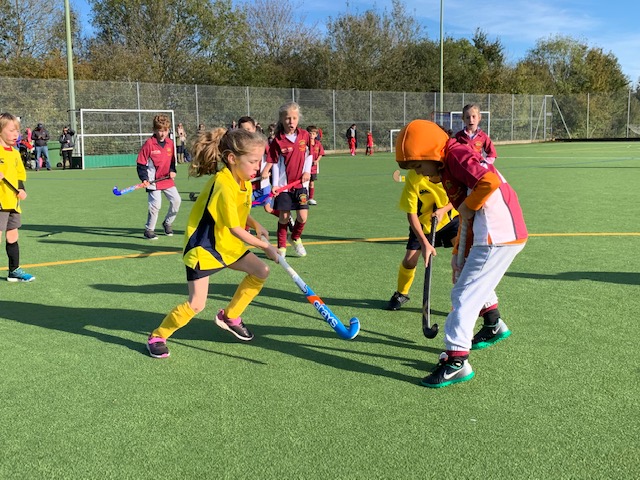 Once the tournaments start, they come thick and fast every 3 weeks so after another wet training session and, enjoyably, one in sunshine it was time to head to Winchester for the 2nd tournament. The squad was affected by half-term holidays but for those who were available it was a rare chance to enjoy a Sunday morning lie-in as the clocks went back an hour. A rare treat for the parents.

We opened the tournament with an excellent 4-0 win against Winchester which could have been so many more as lots of chances were pushed wide of the goal. It was almost a perfect start for Jake in his first tournament as he hit the ball into the goal but unfortunately it was from outside of the scoring zone. Hamish made lots of strong runs and scored twice, with Cherry also scoring a goal which gave her confidence to give a very strong and energetic performance throughout the tournament.

Our 2nd match was a tough and close encounter with Andover 1s which ended up in a 0-0 draw. Emma and Laurence played well and were strong in defence, tackling well and passing the ball away to the midfielders.

We were then up against Southampton who we had beaten 4-1 in the previous tournament. The team again dominated play with Olivia scoring an early goal to settle nerves. As we only had 7 players, Rory (aged 5 and a half) was playing throughout. He was getting thoroughly involved in midfield making one strong run in particular which was only stopped by his teammate (and sister) tackling him. He continued trying hard and showed determination to score his first goal for the club from close range after his initial attempt was saved. Hamish was cleverly sitting deeper in midfield waiting to pick up loose balls and he was then able to make lots of runs into the space in the right hand corner to make good crosses for his teammates – and he also got 2 goals, with the match finishing at 4-0.

After a long break, we then faced Bournemouth which resulted in another scoreless draw with all players getting involved as play moved from end to end. Jake was able to show great speed and determination to chase down a 50 yard clearance when attacking, but also tracking back to help in defence. He also worked well to come back to collect some amazing, early reverse stick passes up the left hand side from Hamish. This kind of passing could really help the team escape from the classic, 8 player melees that are typical at this early stage in their hockey learning.

Our fifth and final game was against Andover 2s. This time Hamish headed for the left hand corner and sent a reverse stick cross straight to Olivia (in a great position for an attacker) who stopped the ball before hitting into the goal to give Romsey a 1-0 lead. The team tried really hard to get another goal but struggled to escape the opposition’s strong tackling. Just before the end, we had a few attempts at clearing the ball but couldn’t quite managed it and Andover scored. At the final whistle it was 1-1.

It was an amazing effort from this young team, with no substitutes, to win 2 games and draw 3, scoring 9 goals and only conceding 1. The players worked hard throughout with all showing improvements from 3 weeks before. If all players are available for the next tournament, it will be a strong squad to select from.