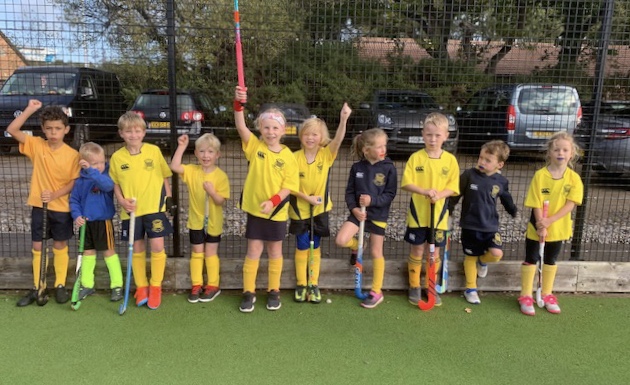 After only a few weeks of compromised training due to astro re-laying, using the tennis courts and heavy rain it was time for the first tournament of the year hosted by Bournemouth. There were 5 players continuing in the U8s from last year tournaments along with William who had played in a couple at the end therefore we had reasonable tournament experience available. However it was difficult to believe this in the first match against a New Forest team who appeared to have no match experience. It was a very slow start with the exception of Hamish who raced away on 4 occasions to score each time, giving Romsey a comfortable opening win.

Although we woke up a bit in the 2nd match, it was unfortunately against Trojans who were quick and determined from the start. Appearing in his first tournament having only picked up a stick a few weeks ago, Lawrence made numerous excellent and well-timed tackles to stop their attacks. Unfortunately they kept on coming and we found it difficult to clear the ball away from the goal-mouth. They scored too many for me to remember and surprisingly the Trojans coach claimed he wasn’t counting, but it was a big defeat.

We then took on Winchester and the whole team improved. Noah started to run back and win tackles before racing upto the Winchester goal, and Emma showed confidence in coming up from defence and nearly scoring a goal. The end result was 5-0 with 2 goals each from Noah and Hamish, and a first goal for Romsey for Grace. Well done Grace!

We then played a 2nd team from New Forest in a relatively even game, but they broke through a few tackles to score and Romsey couldn’t equalise. A 0-1 loss.

We then played Bournemouth 2 in our third game in a row which was pretty tough on the concentration and legs. William made his mark in this game with a few good tackles in defence and Rory and Elijah were like terriers trying to tackle anything that moved. We were 0-1 down until just before the end when Cherry swept a cross in from the top of the D to equalise, resulting in a 1-1 result.

The last game was against Southampton and a sweet-fuelled team played really well to win 4-1 with Hamish scoring all of them. It was a good result to finish on after a tough morning playing 6 x 10 minute games with only 2 breaks, a very compressed timetable – 3 wins, 1 draw and 2 losses. The experienced players got going and all contributed to the success of the team, and it will be exciting to see how the newcomers progress over the next few months. We will look forward to the next tournament on the 27th in Winchester.